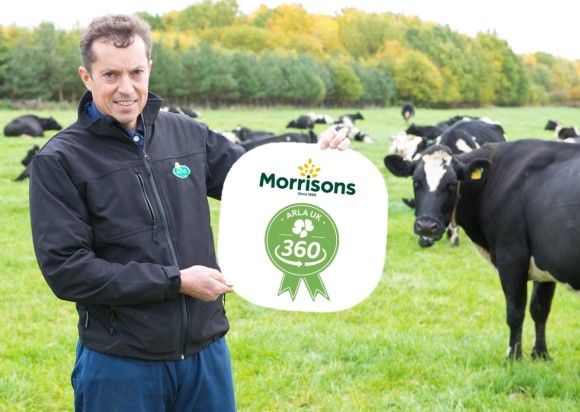 The move means approx. 200 Arla farmer owners will be directly supported by Morrisons to deliver across the eight farm business areas identified in the 360 programme as key to help driving a supply chain that works for everyone.

The move means that Arla owners aligned with Morrisons will transition to the Arla UK 360 standards in the coming months with a target to have reached these by October 2019. The standards cover all six areas of the 360 model; Animal Health, People, Environment and natural resources, community, Economic reinvestment and resilience and Research and Development to lead the dairy agenda.

Sophie Throup, Agriculture Manager at Morrisons comments, "Being supplied by farmers who care about their staff, environment and the welfare of their animals is important to our customers and therefore it is important to us. We are looking forward to working with Arla on introducing their 360 standard to our pool of farmers."

The announcement comes just weeks after the Arla UK 360 programme was recognised at leading industry awards as an innovative farming approach that benefits everyone. Arthur Fearnall, a Morrisons aligned owner and member of Arla’s Board of Directors comments,

“The more support we can secure for the Arla UK 360 programme, the greater the number of Arla’s farmer owners that can participate. Creating one standard for our customers that leads the UK industry, provides increased financial return for farmers and flexibility for research and development to continuously improve our industry. We are delighted that Morrisons will be investing in Arla UK 360 across its entire Arla milk supply meaning around 200 farmers will benefit from their additional support. “

Further information on the Arla UK 360 programme can be found here.

Arla Foods is a global dairy company and co-operative owned by 10,300 dairy farmers with circa 2,400 of whom are British.