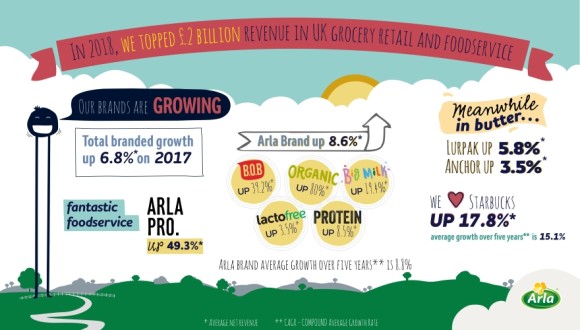 Arla Foods amba has today announced its Group results for 2018¹, revealing strong growth in the UK, its largest market.Total revenues in this country from retail and foodservice exceeded £2 billion for the first time, going up by 3.3% to reach £2.01 billion (€2.27 billion) compared with £1.94 billion (€2.21 billion) in 2017.

Success in 2018 was underpinned by the continued success of Arla branded products, which grew by 8.6%² and has shown average annual growth for the last five years of 8.8%³.Rising demand from UK consumers for healthy, nutritious and sustainable products was reflected in the performance of the award-winning, protein-rich, Arla B.O.B. brand, which grew by 39.2%, and Arla Organic, up by 80% year-on-year.And Arla’s commitment to this market was a driving force behind its partnership with Yeo Valley, Britain’s biggest organic dairy brand, announced last year.

Other categories with a particular emphasis on health and nutrition that enjoyed significant growth included Arla Big Milk, Arla Protein and Arla Lactofree, with the latter launching new cottage cheese and brie lines in 2018.

Established brands Lurpak and Anchor continued to be mainstays of the Arla business in the UK, contributing to an overall increase in revenue for all of Arla’s branded portfolio of 6.8%.Lurpak grew by 5.8% compared to 2017, and Anchor by 3.5%.Lurpak was boosted by the launch of ‘Softest’, judged the biggest food innovation of the year by Kantar.Anchor was crowned Brand of the Year at the Grocer Gold Awards in June 2018.

2019 also got off to a strong start for Arla’s branded portfolio winning the Product of the Year for Arla Skyr Fruit & Oats in the yogurt category.

And, once again, Arla’s foodservice business was a major driver of overall performance, with Arla Pro growing by 49.3%.There were significant new contract wins in 2018 from Morrisons, Aldi and Asda.The depth of Arla’s relationship with its customers was once again illustrated by the length of contracts agreed, of 3 to 5 years, and by their increased backing for the Arla 360 programme, through which retailers and farmers are working together to drive up standards.

The partnership between Arla and Starbucks continues to go from strength-to-strength following the announcement of its 21-year deal, with sales going up by 17.8% in 2018.This is in line with average annual growth for our Starbucks range of 15.1% in each of the last five years.

Ash Amirahmadi, Managing Director, Arla Foods UK, says: “In the UK, Arla has once again performed well.Our much-loved brands such as Lurpak and Anchor have maintained and enhanced their positions as consumer favourites, while product innovation has enabled us to tap into growing consciousness of health, nutrition and sustainability, with especially strong growth in sales of high protein and organic categories such as Arla B.O.B. and Arla Organic.

“Starbucks has in many ways been the star performer this year, with strong growth underlining how we are moving dairy into the soft drink and impulse category.Arla is also looking at new sales channels with a move into direct to consumer with the launch of Arla Baby & Me Organic which is showing really good progress in its early months.

“We continue to face major challenges, such as volatility in the global milk market and on-going uncertainty about Brexit.Despite these factors, we have delivered strong a performance and have been able to return all of the net profit for 2018 to our farmer owners, showing the benefits and resilience of our cooperative, farmer-owned model.”

At a Group level revenue increased to EUR 10.4 billion (compared to EUR 10.3 billion in 2017 and EUR 9.6 billion in 2016), driven mainly by strong growth in branded sales volumes of 3.1 per cent with a wider range of dairy products to meet consumer needs. As a result, Arla grew its share of branded business to 45.2%, surpassing the long-term target in its Good Growth Strategy 2020 of 45%.