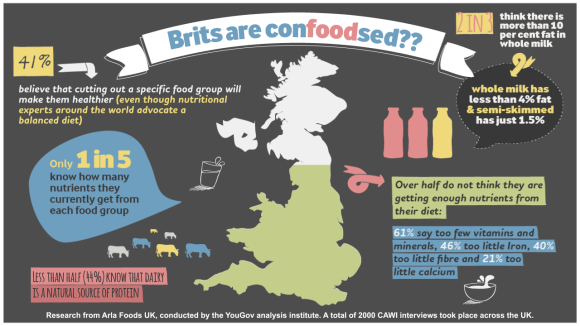 Today, Saturday 1st June, marks World Milk Day, but a new YouGov survey on behalf of Arla Foods UK shows there is widespread ‘confoodsion’ among UK consumers. One finding suggests two-thirds of all Brits wrongly think there is more than 10 per cent fat in whole milk, which in-fact contains less than four percent.

The research also finds that contradicting information from social influencers and a myriad of conflicting opinions have resulted in confusion when it comes to the nation’s approach to healthy eating.

And this isn’t a generational divide, with consistency of ‘confoodsion’ seen across all age groups.

Danny Micklethwaite, Senior Category Director for Milk at Arla Foods UK, comments, “What surprised us from the research was just how much confusion there is around nutrients and the health credentials of food. There is a clear need for fewer opinions about food and better education around food production, nutrients and ingredients to help the public achieve their healthier ambitions.”

The UK findings from over 2,000 participants are similar to those of 5,000 people across Denmark, Sweden, Germany and Finland. They highlight that despite more people wanting to lead a healthier life (51% state they see themselves as a healthy eater) there is still uncertainty when it comes to knowing exactly what we should consume.

Danny Micklethwaite continues, “Gone are the days of traditional meals and the same old ingredients. We’re a nation that likes to experiment with food, try out new recipes and fuel our bodies with nutrients to match our lifestyle choices. The risk of this is that getting the right nutritional balance can be difficult. Food companies, the Government and the media all need to rethink the way we share nutritional information for all age groups if we are to avoid serious problems with malnutrition in years to come.”

When it comes to thinking about the role dairy can play in a nutrient rich diet, Arla Foods Nutritionist Lise Larson says, “Milk is natures original superfood. Without any additives or fortification, it is nutrient rich and a simple way to consume the key nutrients needed for a healthy diet. A little bit of everything in moderation is still the best book to play by. The decades old advice that good nutrition should be mostly plant based still stands, but you need to ensure that you also have smaller quantities of nutrient dense foods if you are to get the recommended nutrient requirements without supplements or fortification.”