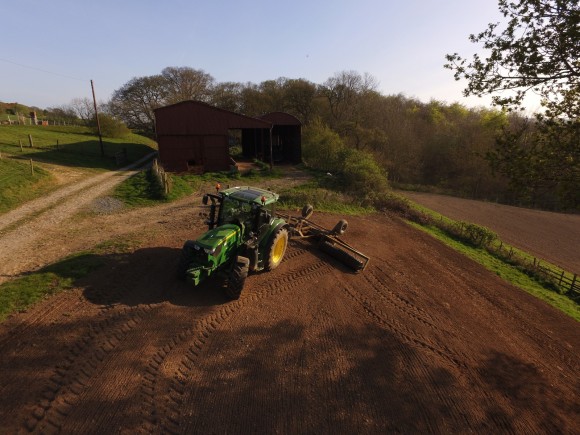 A group of farmers from the Arla Foods dairy cooperative have launched a trial initiative to see whether their efforts for environmentally friendly dairy farming can be broadened to help increase wild bee populations given the crucial role they play in supporting our ecosystems.

The news follows the recent UN report which revealed one million animal species are at risk of extinction globally. Of these species, a further report found pollinators, in particular some bees, have been in steady decline, with an average of 11 species lost in every square kilometre in the UK between 1980 and 2013.

Forming part of the dairy cooperative’s farm standards programme Arla UK 360, the research and development module Project Pollinator, will see a trial of five farmers across the country set aside areas of land to help vital bee pollinators. Farmers will cultivate, seed and farm the land to create the best possible habitat for a variety of insects, which are crucial in pollinating many of the crops we all rely on. 15% of Arla’s farmer owners already work with independent nature organisations to support bio-diversity and many more have their own on farm biodiversity initiatives. However, the focus of the trial will be to explore whether selecting and cultivating flowers specially for bees and farming the wildlife can help change the declining numbers of bees.

Marek Nowakowski of the Wildlife Farming Company, who is helping the Arla farmers with the trial, explains, “We look to farmers like those on Arla’s trial to lead the way in showing more of us in the UK how to better manage our balance with wildlife.Habitat quality and variety are the key to increasing biodiversity so this trial, treating wildlife as a crop and farming it so it grows by design, could have significant impact on the efficiency of the land in supporting the types of bees that are our greatest pollinators.

“I have never seen such passion and enthusiasm from a farming community looking to provide increased opportunities for pollinators. Our growing population requires increasing amounts of land space for housing, infrastructure and food production but this can’t be don’t at the expense of the world around us, we need to give wildlife a helping hand.”

The seed mix has been specially selected to attract and sustain multiple bee species and other wildlife, with two dozen wildflower and grass species sown and cultivated across half a hectare of land on each farm, (equivalent to 184 average UK back gardens).

With over 2,400 UK dairy farmers in the Arla dairy cooperative and 10,300 across Europe, if the trial proves successful, the scope for scale up could prove significant for bees.

Graham Wilkinson, Agriculture Director for Arla Foods UK comments, “Having announced our ambition to be a carbon net zero company by 2050, we’re focusing our attention on creating tangible initiatives to achieve this. As well as addressing greenhouse gas emissions, our ambition stretches further to address biodiversity on farms.

“The world’s natural systems are more intertwined than we might realise but it’s a daily consideration for Arla’s farmer owners. A key part of the Arla UK 360 programme is focused on researching and developing opportunities to continue to create a supply chain that works for everyone; the environment, the cows, the farmer, the retailer and the consumer. Our R&D projects will prove a vital way to explore potential new thinking for dairy farming.”

Farmers are able to participate in the programme thanks to the support from Aldi and Morrisons. Fiona Dale, a Shropshire-based Arla UK 360 farmer supported by Aldi, comments: “Working with nature is front of mind for farmers on a daily basis. We already have a number of initiatives on our farm to minimise the impact of food production on the environment. The challenge with projects beyond day to day dairy farming is the time and cost that comes with them, and there are already a lot of asks of farmers, given we are the primary carers of Britain’s countryside.

“However, its only when you join the dots across the intricate interdependencies of nature that you realise we’ll all have to work together and a bit differently if we are to create real change, it’s exciting to think that a farming wildlife approach could play a real part in that.”

While Britain may not yet directly face the visible climate catastrophes seen in many countries across the world, it isn’t immune from the effects of climate change and decreased biodiversity. 97% of flower meadows have disappeared since 1945, which has a significant impact on the insect population that underpins the food chain.

David Christensen, an Arla farmer owner based in Oxfordshire, states: “As Arla farmers, we commit ourselves to the highest standards, which includes caring for our land as well as our animals. We can’t wait to see the results of this project on our farms. We won’t be farming lands of milk and honey though, this project is focused completely on creating an insect-friendly ecosystem!”