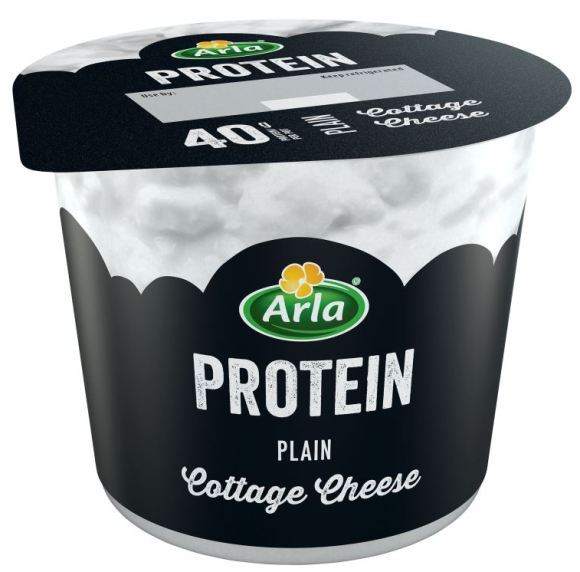 Arla Foods has responded to the increasing numbers of consumers seeking protein rich foods with a new addition to its Arla Protein range – Arla Protein Cottage Cheese; containing 20g of protein per serving.

The farmer-owned dairy company launched Arla Protein 18 months ago and is currently valued at £5.2m*. The successful range includes Arla Protein drinks and yogurt pots in a variety of flavours. The launch of cottage cheese takes Arla Protein into the cheese aisle offering consumers even more choice.

Steph Barker, Arla Protein Brand Manager said: “We’re delighted to be building on the success of the Arla Protein range by taking it into the cheese category. Arla Protein Cottage Cheese, which is made with all naturally sourced ingredients, is a versatile ingredient that allows consumers to easily add protein to their diet.”

In 2016 Arla has launched a number of exciting new products including Arla Cravendale 250ml bottles for the on-the-go shopper, a healthy option sitting next to the fizzy drinks and fruit juices. It has also launched Arla skyr drinks and Arla Best of Both – fat-free milk that tastes as good as semi-skimmed.

Supported by ongoing sponsorships with Leeds Rhinos and Our Parks, Arla Protein will also be sampling at numerous events across the summer, including Bear Grylls Survival Race, World Triathlon Series, and Total Warrior.

Of which saturates 1.8g

Of which sugars 5.5g

In addition to Arla Protein Cottage Cheese, the range includes:

Arla Foods is a global dairy company and co-operative owned by 12,700 dairy farmers with circa 2,700 of whom are British.

Arla Foods UK is the largest dairy company in the country and is home to leading dairy brands Anchor®, Cravendale, and Lactofree® with a turnover of €2.9 billion. As well as being a leading supplier of fresh milk, number one in butter, spreads and cream, Arla is the UK’s largest cheese manufacturer. It has also built the world’s largest fresh milk facility located at Aylesbury and has plans for it to be the first zero carbon site of its kind. The UK business has a team of approximately 3,500 colleagues located at its dairies, distribution centres and head office.