​Arla is Cream of the 2015 dairy trade awards 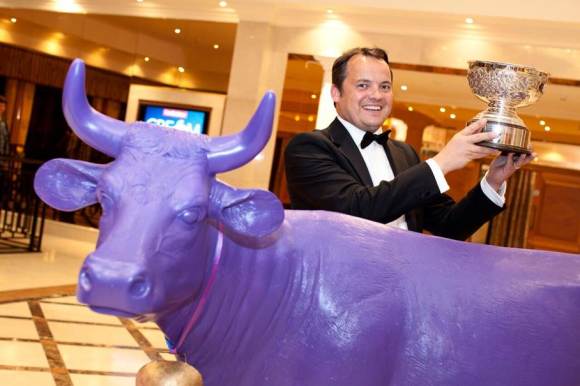 Arla Foods UK is the winner of the Silver Cup, the top award at the 2015 Cream Awards. The Silver Cup award, sponsored by the Merial brand Eprinex, is the culmination of the annual dairy industry trade awards organised by Grove House Publishing, home of the Farm Business stable of titles.

The Cream Awards judges decided that the farmer-owned business was a clear winner this year. They were particularly impressed by the co-operative’s large scale investment in the UK dairy industry, its unrivaled talent for brand building and marketing and its work to educate consumers about the dairy industry, the technologies used and how milk is made.

As well as being a proactive force in driving consumer dairy brands, the judges found Arla to have shown its long-term commitment to the dairy sector at a time of crisis. They concluded that its highly ambitious expansion and huge investment in dairy capacity shows that there will be a bright future for dairying.

“The investment Arla Foods has made in British dairying is most welcome during these tough times,” stated NFU president Meurig Raymond, opening the Cream Awards ceremony and dinner at the National Motorcycle Museum last week. “The company’s support and confidence is great for the long term outlook for the industry and I am delighted they won such a prestigious award.”

For Arla Foods, member services director Graham Wilkinson said: “It is a privilege for Arla to receive this prestigious Cream Award, in recognition of our contribution to the UK Dairy Industry. As a farmer-owned co-operative we have been able to invest in the long-term future of the business, by delivering innovative new products, building a first class brand portfolio and building world class facilities, which all help to build the confidence of Arla’s farmer owners.”

Arla Foods is a global dairy company and co-operative owned by 12,700 dairy farmers circa 3,000 of whom are British.