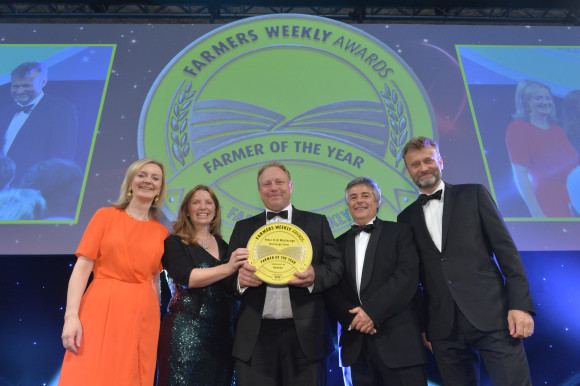 In a first for the Farmers Weekly Awards, a dairy farmer was crowned ‘Farmer of the Year’ last night in London. It is the most prestigious award of the night and is chosen from all the winners on the night.

Arla farmer owners Peter and Di Wastenage, who’s farm is in Devon, had already been awarded the Best Dairy Farmer earlier in the evening but were stunned to have their names read out on for the Farmer of the Year 2015 award. The award was presented by the Rt Hon Liz Truss MP, Secretary of State for Environment, Food and Rural Affairs,

Di Wastenage commented after the ceremony: “It was amazing to receive the award for Best Dairy Farmer but to then be awarded Farmer of the Year was a lovely surprise to end a great evening especially as no Dairy farm has ever won it before. We dedicate it to everyone involved in our farming business, all the other Arla farmers and also the Dairy Industry as whole who have had a challenging year.”

The judges particularly like the strong business acumen and growth shown by the Wastenage’s. They have clear targets to achieve high profitability and creative thinking to lower production costs who, in a short period of time and through a difficult recession, have built up a thriving dairy business. Wastenage’s run a New Zealand-style dairy with a tight-knit, well-trained team enabling the enterprising couple to expand the business to 645 hectares with more than 1,000 cows across four units.

Debbie Beaton, Farmers Weekly editorial projects director said: “Peter and Di are a shining beacon for the future of UK family farms. Despite the phenomenal growth of their own dairy business, they find time to mentor and motivate others to share in their success”

The night was made even more special for Arla farmers with Brian Yates from Kirkcudbrightshire near Dumfries, named runner-up to the Wastenage’s in the Best Dairy Farmer Award. The judges were impressed by how Brian ran a dairy you would be proud to showcase to the public and it was a fantastic example of a thriving family dairy with high-merit cows.

Finally, Richard Dayment was a nominee for Young Farmer of the year award. He has worked incredibly hard to find himself managing 1,300 acres of grassland, in a shared-equity agreement.

For more information on why Peter and Di won, click here - http://www.fwi.co.uk/livestock/farmers-weekly-awards-2015-farmer-of-the-year.htm

Arla Foods is a global dairy company and co-operative owned by dairy farmers circa 3,000 of whom are British.